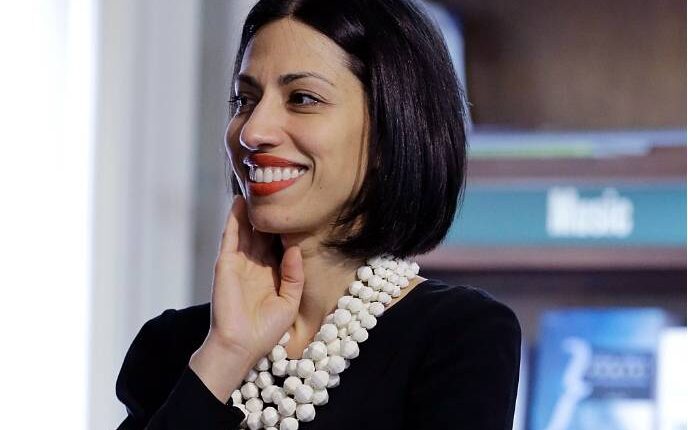 Huma Abedin has been in the background for more than two decades. Abedin, a former wife of disgraced Congressman Anthony Weiner and a gatekeeper to one of the world’s most famous women, Hillary Clinton, has been frequently seen in public but rarely heard from.

Abedin sets forth her story — the good and the ugly — in her memoir, Both/And: A Life in Many Worlds. The title alludes to her many different personalities. Although he was born in Michigan, he was reared in Saudi Arabia. Her father was Pakistani and her mother was Indian. “You are an American and a Muslim,” her Abbu (father) told her.

Many children of immigrants (like me) choose public service as a way to give back to the county that has provided so much to their families. Abedin is no different. Except that her work in the White House, the Senate, and the State Department put her in an exclusive club. She took fishing lessons from Senators John McCain and Lindsey Graham, stayed at Buckingham Palace, and celebrated Eid with then-President Barack Obama at a White House Iftar feast. It’s even more shocking when she describes an unwanted and unexpected kiss from an unnamed senator, or when a stranger approaches Abedin in the NYC subway shortly after Clinton’s 2016 loss to Donald Trump and asks, “If you don’t love this country, why don’t you leave?”

She didn’t respond to the stranger at the time, but this book is her response. Her memoir, however, is less about the “multiple worlds” she lives in and more about Hillaryland, the one place that has dominated her existence since her senior year of college.

Hillary Clinton as a friend and mentor

Find a photo of Hillary Clinton — or HRC, as she’s referred to in the book — and Abedin is almost always in the background, whispering something in her ear, handing her papers, briefing her, or standing in the wings watching. Throughout the book, she expresses her appreciation and regard for HRC. “I want to do whatever it takes to support her [HRC] and help her succeed in anything she does,” she declared in one of her early job interviews. Abedin’s concentration has been on helping HRC succeed because she believes in Clinton and her job, whether it was leaving a family wedding early or working exceptionally long days that left little time for family, friends, let alone romance.

There isn’t a single negative comment about HRC in this book. Her condemnation of Comey for the email server is directed at him, and she scarcely mentions the infighting that afflicted Clinton’s 2008 campaign. Her admiration for the woman with whom she has worked for more than 20 years and who is said to regard Abedin like a second daughter is evident. “It’s beneficial to have someone in your life who can provide you with sound guidance, genuine views, and discretion. It just so happened to be Hillary Clinton in my situation “She is a writer.

But it wasn’t HRC, but her chief of staff Cheryl Mills, who encouraged Abedin, then deputy chief of staff, to have a seat at the table, for all the work she did behind the scenes for Clinton, from travel to policy (she hid in a trunk to evade the press — not the last time she’d do that— to set up a secret meeting between Obama and Clinton and was on a work call while she was in labor). “”You have a seat at the table,” Mills told Abedin, “and you are no longer the one waiting outside for the meeting to end.” You’ve had one for a long time on the inside. It’s now your turn to inhabit it in the real world.”

HRC offered Abedin with a great deal of support and loyalty, which she returned. But you can also see how much pressure Abedin put on herself to never do anything that would portray Clinton in a bad light. Her marriage, unfortunately, did not assist her in this regard.

Weiner attempted to get to know Abedin for the first time in 2001, and to put it frankly, she wasn’t interested, she writes. Weiner and her employer, on the other hand, were both New York politicians who saw each other frequently. Nonetheless, an email he sent her in 2007 resulted in a late-night supper of French fries and milkshakes. Weiner sat between Clinton and Obama at the State of the Union after the two announced their presidential candidacies and exchanged a few words. “This was an occasion where everyone was itching to know what had happened, but no one really needed to know,” Abedin said. If there was something pertinent, Clinton would let her know. Weiner stated it was a bizarre encounter and asked if Abedin wanted to know more. She went ahead and did it. He never actually said anything in the end, but the conversation, which began with politics and then moved on to family and other themes, lasted until 3 a.m. She describes him as “clever, entertaining, and never boring.” That friendship grew into something more – her first serious relationship.

She had reservations about marrying Weiner because of their differing religious beliefs (Weiner gave up pork and alcohol for her) and her desire to remain in the background, which is not expected of a politician’s wife. Her relatives had some misgivings as well. Abedin recalls her mother going to HRC to clear up her misgivings. If there was one red indicator, Abedin writes, it would have been when they were talking about how and when to get married. She recalled that all he wanted to do was marry her. “I’m messed up,” he explained, “and you have to fix me.” She assumed he was joking at the moment.

I admit, it’s like driving past a car disaster while reading about the type of relationship she wanted (the love and dedication her parents had for one another) and knowing about the sexting scandals and the FBI probe into Clinton’s emails that awaits her. I wanted to look away, but I was curious as to why she had stuck with Weiner for so long. The solution is straightforward: for her family’s sake. When the initial sexting issue surfaced, she was pregnant with their first child, Jordan. “At the time, it appeared to me that my husband had done something infuriating, extremely wrong, juvenile, rude, and stupid,” she writes. He needed assistance because they were expecting a child.

When it happened again during his mayoral campaign, she remained by him and spoke out in support of him at a press conference. “The reaction was quick and harsh,” she writes. It would be the last time she did something like that. She even anticipated to lose her job as a result of it, as she recalled others advising HRC to fire her. Clinton was not one of them. Abedin writes, “She indicated she didn’t believe I should pay a professional price for what was essentially my husband’s error, not mine.”

But, despite his flaws as a husband, which included more than sexting with some women, Abedin writes that he was and is a decent parent. While she was on the campaign trail for HRC’s 2016 candidacy, he got their son ready for school and bedtime, planned play dates and doctor’s visits, and kept the house running. The marriage had broken down, but it was the sexting incident, which included a photo of their son and resulted in a child services investigation, that eventually drove her to divorce Weiner. If it was the threat to her family that held her in that marriage for so long, it was the threat to her family that eventually drove her to leave. She solely mentions Weiner’s difficulties in the context of how they affected her. (At the end of the day, she writes, it’s his story to tell.) They are still co-parenting, but it has required a lot of effort and counseling on both of their parts, which she claims she undertook for their son.

You May also like; The recent story of Huma Abedin where she claimed in her new book that she was sexually abused.

Her faith and family are her pillars.

One of the first lessons Abedin says she learnt in Islam class was that “slander, gossip, and exploiting people’s personal weaknesses” were not acceptable behavior for any genuine Muslim. Both Abedin and Clinton had their husbands’ personal flaws exposed in public. Both have religion, family, and friends to help them get through. And if they spoke about anything other than what Abedin mentions in the book, you get the impression that was and is none of anyone else’s concern.

While most people will be interested in the politics or the controversies, Abedin’s parents’ tale — their family’s history — provides the most insight into who she is. Her ideals and principles have been founded on the foundations of family and faith. And her parents’ lessons, from carrying out her obligations to greeting guests, as well as her father’s early death, impacted who she is today. Much of it is summed up by something her father wrote — a thought of the day letter that appears at the beginning of the memoir but is repeated throughout. “A commitment should be a commitment as an American, a Muslim, and a member of a moral family… You must be fair, honest, and forthright “He is a writer. Get out of the kitchen if you can’t tolerate the heat. “Your exit, on the other hand, should be charming, dignified, and legal. Allow people to do their own thing. You have first and foremost a responsibility to yourself, your principles, and values, and then to Yahweh (Allah).”

In this novel, her faith is on full show. It’s disheartening, though, that she doesn’t discuss islamophobia, which has been a source of concern for many Muslim-Americans, until late in the book. When her family is targeted by a few members of Congress and threats are made against her, it is McCain and others who defend Abedin. However, it is the prospect (and then reality) of a Trump administration that has prompted her to speak up.

She has little issue limiting how much she discloses in this memoir, despite the fact that she has had to say “No” to some powerful people and is, at her core, a private person.

Sure, there are some details that everyone wants to know (who was the senator who forced her to kiss him, who was the “friend” who suggested she divorce Weiner and raise a family later), but just because we want to know doesn’t mean we need to know.