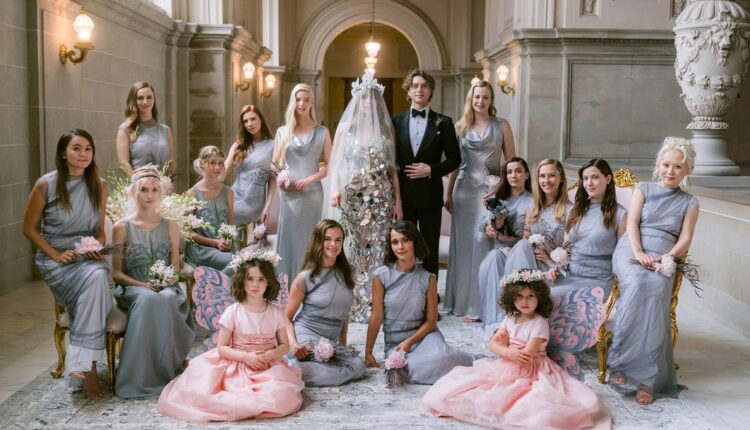 Ivy Love Getty, the great-granddaughter of oil magnate J. Paul Getty and one of the billion-dollar fortune’s heiresses, married photographer Tobias Engel in a one-of-a-kind reflected bridal gown in San Francisco over the weekend.

The 26-year-old model and artist donned a unique gown designed by John Galliano for Maison Margiela Haute Couture. The gown was comprised of four layers covered in broken mirror fragments to create a flowery theme. “A big percentage of the dress is real mirror,” Galliano told Vogue. “But because she has to walk in it, we created a substance that would evoke real mirror but weigh considerably less.” Her veil was embroidered with walnuts in honor of her late grandmother Ann, who grew up on a walnut farm, as well as guitars in honor of her late father, John Gilbert, a musician who passed away last year. Getty explained that she chose Galliano for her big day because her grandmother was always a huge supporter of his work, buying his designs for Givenchy and Christian Dior. The bride told the magazine, “My grandmother always wore John Galliano’s designs. My grandmother always admired him so it felt as if she was there with me during all of this. After my grandmother’s passing—she was really more like a mother to me—I felt this connection to John. I knew I wanted him to create the dress for my wedding. My aunt Vanessa, who I am very close to, was connected to him through a friend, and here we are.”

Engel first met the heiress through one of her family members and then the pair reconnected a year later at Paris Fashion Week. Over the course of their relationship, the couple has traveled frequently and on one of these trips to Capri, Engel decided to propose. “Normally, I pick where we go out to eat, but this time Toby insisted he pick. This didn’t raise any red flags, but when I got to the restaurant, I thought to myself ‘Oh he really planned this,’” Getty explained. “We had a table overlooking the entire island away from the rest of the restaurant. The waitress came, and we ordered our food. As the sun was getting ready to set, we went outside to take photos of it. Toby set his iPhone timer and got down on one knee. The timer went off at the perfect moment as we have the most incredible photo.” The model’s engagement ring is a sapphire set on a yellow gold band with diamonds from a necklace her grandmother gave her as a teen surrounding the center stone. “It is the most unique piece of jewelry and so sentimental to me,” she said. “I can’t help but smile every time I look down and see it!”