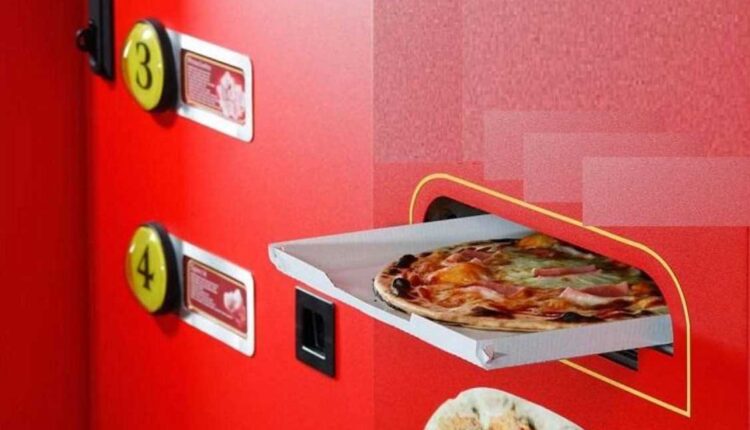 The introduction of robotic pizza vending machines has brought a new era of convenience to late-night eating habits. While these machines are still not on the market yet, many food service companies are exploring the technology, and it seems that these machines will make a big splash in the near future. As a result, you might want to know a few things about the products that are currently available.

Stellar Pizza is a new food truck concept that offers gourmet pizza and other dishes, cooked by robots. The company is owned by a team of former SpaceX engineers. It has raised $9 million from investors, including Jay-Z’s venture capital firm.

The company is currently working on a machine that can create a pie every 45 seconds. That’s a whole lot of dough in a little bit of time. And the machine uses cutting-edge robotics to do the job.

It is also using a touch screen that lets customers choose their own toppings. For now, it will serve traditional toppings, including pepperoni and mozzarella, but the founders hope to offer other options, like bacon and olives.

A pizza robot seems to be the next step in the evolution of automated delivery. Whether it will be successful remains to be seen. However, automation has become an increasingly popular way to speed up restaurant operations, and there have been many companies trying it out.

Benson Tsai, the founder of Stellar Pizza, combines his love for pizza with his expertise in engineering and physics. He started his first startup before going to work at SpaceX. Later, Tsai founded an electric truck company.

Tsai spent five years designing battery systems for SpaceX. He has since left the spaceship maker to start his own pizza business. In the meantime, he’s also developing his pizza delivery service.

There are a few other pizza-related robots on the market, but the one from Stellar Pizza is the most interesting. Not only does it serve the pizza, but it can bake it in less than a minute.

As a result of this innovative design, the company’s business model seems to be quite efficient. But some consumers worry about job loss, while others commend it for making food more affordable.

Nala Robotics is an AI technology company based in Illinois and California that specializes in robotic kitchens and restaurant-as-a-service. The company operates three restaurants in Naperville, Ill. (Thai76, One Mean Chicken, Surya Tiffins) and recently announced a partnership with Slice Factory. This new partnership will see the two companies combining their technologies to bring pizza-making robots to Chicago-area consumers.

Nala has created an automated multi-cuisine chef called Pizzaiola. It is a 7-axis robotic chef that can cook a variety of pizzas, pasta, salads, wings, burgers, and other food items. With the help of a robotic arm and a proprietary AI system, the machine will learn and replicate a wide range of recipes.

Pizzaiola’s robotic operating system can monitor and manage over 1,200 parameters every microsecond. The system responds to voice menu orders, chooses the correct dough, and adds cheese, sauce, and toppings to create a delicious pizza.

Pizzaiola’s AI can also learn and respond to more than 50 pizza-making commands. While the system can make a variety of items, the most advanced version of the machine is capable of cooking an “infinite” number of recipes. In addition to Pizzaiola’s signature 28-inch pie, the machine can prepare other pizza varieties, including Chicago-style stuffed pizzas and pasta dishes.

Along with Pizzaiola, Nala Robotics recently unveiled a new restaurant-as-a-service platform, which allows customers to create their own pizzeria-style eateries. They can choose from a variety of brick ovens and conveyor-style ovens, as well as pasta and salad stations. Additionally, they offer meal-plan subscriptions and carryout services.

Nala is ready to serve any city in the world. In fact, the company has plans to open up restaurants in Dubai, Singapore, and even New York.

PizzaForno is a pizza restaurant that uses robotic technology to create a fresh, delicious pizza. The restaurant can serve a 12-inch pizza in less than three minutes.

This restaurant has 20 locations in North America and will be launching at least one more location in Louisiana by 2022. Using technology from France, PizzaForno is a fully automated, unattended kiosk that serves artisanal pizza.

Customers can order a pizza by pointing a smartphone at the device. They can choose a topping from a menu, and the machine will deliver the pizza. It costs $12 for a 12″ pizza. Guests can also pay with their credit card or tap a contactless debit card.

Currently, PizzaForno has 25 machines in Ontario. However, it plans to expand its presence by placing 1,000 kiosks in the U.S. by the end of 2022.

In addition to providing a convenient, accessible restaurant, PizzaForno has also created additional revenue for hotels. Each of its kiosks features a 32-inch touchscreen and a refrigerated section for its pies. The kiosks are fully automated and use high-quality ingredients.

PizzaForno’s machines have been operating in Canada for a couple of years. In addition to restaurants and restaurants, these machines can be placed in cafeterias and hospitals.

The concept is similar to that of coin-operated kiosks. However, the machines are incredibly sophisticated. Instead of just popping in a pizza, the kiosks utilize a robotic arm to transfer the pizza to the oven. Using 100% Italian Caputo flour and hand-stretched authentic Romana crusts, the robots prepare the pies.

The machines are designed to be placed anywhere, indoors or outdoors. A flatbed truck can transport them.

If you’re hungry late at night, you may want to try some of the latest innovations in robotic pizza vending machines. These automated machines can cook fresh artisan pizzas in three minutes or less. Some even boast features such as an unattended payment terminal. And, while this new trend may seem strange, machines are helping the food industry adapt to a changing workforce.

The concept is simple: place an order on a touch screen. Choose your toppings, and a robot prepares your pizza in less than four minutes. You’ll also get an estimated delivery time. This system is perfect for hospitals, apartment complexes, and airports.

A few weeks ago, a company called Piestro announced its launch of a robotic pizzeria. It’s been receiving more than 4,000 pre-orders. They’re working with Serve Robotics to create an end-to-end delivery automation experience.

They’ve also found a partner in Carbone Restaurant Group, which is Canada’s fastest-growing pizza brand. The two companies are aiming to market 500 units across Canada.

In addition, the company’s partnership with 800 Degrees Pizza has helped it expand into more markets. That’s why the company is launching the 800 Go brand. With this partnership, the chain and Piestro are setting up stores in high-traffic locations that will double as replenishment centers for the robots.

In the future, Piestro’s pizza-making machine will be rented by restaurants, and other brands will also use it to expand sales. But for now, the El Segundo-based company is looking to raise $20 million to expand its business.

They also announced that they’ve partnered with facial recognition payment provider PopID. This means that you’ll be able to pay with a smartphone app rather than a traditional credit card. Using face recognition, you’ll be able to make payments more safely and securely.

Smart Pizza Vending Machines are nifty little device that helps you to get your pizza fix in a hurry. These machines have several functions, including putting on the toppings, kneading the dough, and baking the pizza.

They are also equipped with technology which allows you to place an order, receive your order, and pay for it all in a matter of seconds. You can even choose your desired toppings through a touchscreen display.

These machines are a boon for businesses as they are more efficient at serving customers, saving on staff, and providing better profit margins. In addition, they are great for individuals looking for a quick snack on the way home from a night out at the pub.

It has been reported that smart pizza vending machines are gaining popularity. Many of these units are located in malls, shopping complexes, amusement parks, and railway stations.

The biggest drawback of these machines is that they do not produce the best quality pizza, but that’s a problem that can be solved with a little know-how. Most of these units feature an industry-standard deck oven which keeps the taste of the pizza intact. A smart pizza vending machine will not only help you solve the midnight munching problem, but you’ll also have the satisfaction of knowing you are not wasting time or money.