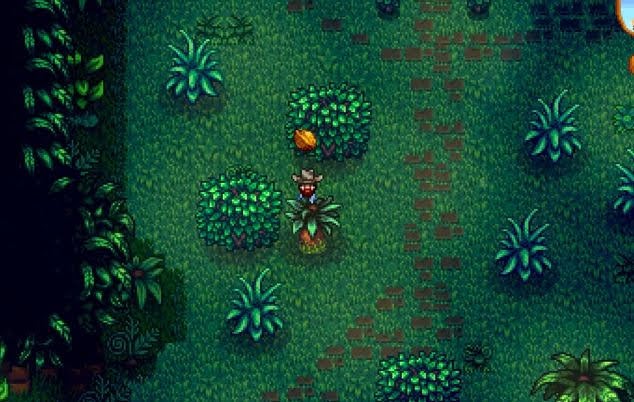 Hi everyone, if you seek to uncover How to find Secret Statues, Collectibles and Hidden Decoration in Stardew Valley 1.5. then you are the right place, First of all cover the new statues that came with ginger Island and the 1.5 update since I’d expect these to be a little bit less known.

the Gorman statue depicts the frog from the cave by your ginger Island farm and can be obtained by fishing in the cove on the southeast part of the island, it is actually kind of tough to get so it could take a day or two of attempts before you finally pull in the present, so don’t give up if you don’t get it immediately.

Similarly, if you make your way down the left path of the volcano out to where there used to be two golden walnuts, which I assume you already found thanks to my golden walnuts article, and fish in this area of the river, you’ll get a squirrel figurine.

Off of ginger island there’s an Iridium krobus statue found in the water below the sewer pipe exit but your fishing rod doesn’t quite have the reach to get there, it’s only through boosting your fishing level up to 15, you’ll be able to get the required distance in your cast.

This can be done by making a seafoam pudding with key seasoning which will give the dish, a plus five boosts instead of a typical plus four, or you only need a plus for fishing level boost if you have the master on your fishing rod, you can get this plus four boosts from a normal seafoam pudding or a dish of the sea fish stew or lobster bisque seasoning.

within Pelican Town there exists three locked boxes that contain secret statues, if you placed a strange bond in the chest and Vincent’s room, you’ll get the frog Amman statue. and finally, if you enter this secret area above the blacksmith and place a super cucumber into the brown box, you’ll get the HMTGF statue.

It’s a lot of unique collectibles that can only be obtained by playing the crane game in the movie theater, movie theater is unlocked after you complete the community center and one additional bundle, or if you went the JoJa route you can unlock it for 500,000 gold each attempt will cost you 500 And there’s a 25% chance that the crane is being used by someone else when you enter the theater and it will always be occupied after a movie.

Here are items you can obtain rotate based on season and even the year, there’s a whole variety of cool prizes you can win from the crane, but I’ll talk about some of the items that you can only get exclusively through this mini game.

during any season you can win the futon rabbit, or one of the four small Junimo Plushes, you can set these on any table or you can place them directly onto the ground during the fall you have the chance to win either the green or purple Serpent Statue, the same statues that are present at level 120 In the mines, and there’s also my personal favorites the wumbus and the Bobo statues, these massive collectibles can only be obtained will the film one versus playing which occurs during this second summer after you unlock the theater and repeats every two summers after that, although a few of the next pieces aren’t secrets, I’d still consider them unique.

If you want the stone Junimo mode to go with your set from the night market go behind the community center, up against the wood fence and hit the hidden statue with a tool like a pickaxe secret note 14 reveals the hint for finding this statue but you do not need to first find the note in order to obtain it.

However, you do need to find secret note 19 before getting its treasure which is the solid gold Louis statue hidden behind his house, when standing up against the back of the truck here, walk all the way to the left, then down and then right click to bring the item into your inventory, don’t leave this guy around town though or else you’ll be left with a displeased the Lewis, and a home truly will not be a home without a JoJa cola soda machine right in the bedroom.

If you sold your soul to capitalism and turn the community center into a JoJa warehouse you instead purchase the bundle upgrades with straight gold using the JoJa Community Development form.

Upon the completion of this form, you’ll be sent the soda machine as a thank you for your efforts. If instead you were a decent human being and completed the community center as intended, you’ll be gifted the Stardew hero trophy.

Following the theme of weird things to keep in the bedroom, are the arcade systems for Junimo cart and journey of the prairie king when you beat the final level of Journey of the prairie King or the progress mode in Junimo cart, you’ll be sent a playable system in the mail the next day from the developers, but honestly just beating either of these games on their own is enough of an accomplishment to prove your superiority that these other awards seem a bit redundant.

And to close this out I’ll cover some of the more luxurious pieces you can pick up on your farm, you can purchase the statue of endless fortune from this NPC in the casino for a whopping 1 million gold.

mostly everyone knows about the statue of perfection which produces between two and eight pieces of iridium, or every day, but in case you don’t you get it by having all four candles lit at the end of your year to evaluation on the farm, what just came with the 1.5 update however is the statue of true perfection, it produces one prismatic shard every day and can only be obtained after reaching a 100% Perfection rating and keys walnut room, I would say that this item above all else, is the coolest item to have in the game.