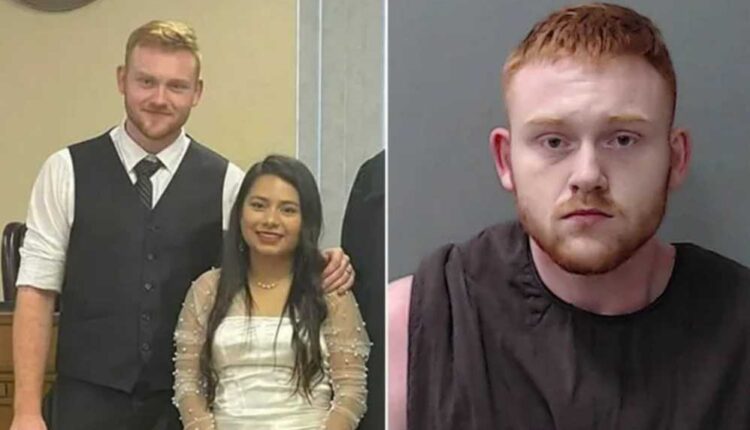 A Texas man was ordered held on $500,000 bail for allegedly murdering and decapitating his newlywed bride inside the home they shared on his family’s property, according to reports.

Just minutes after the gruesome killing, surveillance video seemingly captured 21-year-old Jared James Dicus stealing a beer from a convenience store. Video shows him walking past the counter without paying, before cracking open the cold one outside in the parking lot, FOX 26 Houston reported.

Dicus had just married 21-year-old Anggy Diaz in October. Waller County Sheriff Troy Guidry described the victim as an “undocumented” woman who worked as counter help at a local business. Diaz’ family said she was originally from Nicaragua and had initially been in the care of an aunt, Adis Diaz, when she first arrived in the United States.

“When you are Central American or Latina and families immigrate to another country the parents leave their children in the care of someone,” Adis Diaz told FOX 26. “She was like my own daughter. It has been very hard. As a family, we are heartbroken. I have slept two hours since this happened.”

Guidry said deputies first responded to a call about a possibly deceased person at 4:18 p.m. Wednesday in the 200 block of Oak Hollow Boulevard. The newlywed couple lived in a small home behind another house occupied by Dicus’ parents on the same property in the rural, partially wooded residential area.

It was Dicus’ father to first dial 911 when his son came over to the parents’ home, and they noticed something was awry, Guidry told reporters last week.

Inside the smaller home where the newlyweds had lived, the sheriff said deputies encountered a “gruesome scene” covered in blood, finding a portion of the woman’s dismembered body. Dicus and his whole family were detained and brought in for questioning.

The weapon used was a kitchen knife, Guidry said. The sheriff also said investigators had a confession.

Dicus was later placed under arrest and charged. Investigators believe the murder occurred around 11 a.m. that day, and the surveillance video from the nearby convenience store showed Dicus minutes before noon. The motive remains under investigation. KTRK-TV reported that investigators said they are looking into whether drugs were somehow involved.

“Diaz was this little ray of sunshine in his life,” a neighbor, who grew up with Dicus, told KTRK-TV. “She was optimistic. He made her happy, and she kept him in good spirits.”

The couple was married at the local courthouse on Oct. 21 by Waller County Judge Trey Duhon. Duhon initially shared a photo showing a smiling Diaz in a wedding dress, with her new husband, Dicus, with a hand on her shoulder. In wake of the murder, Duhon said he removed the couple’s photo from Facebook.

“During my short time with them, they were a very nice young couple,” Duhon wrote last week, sharing a link to the victim’s family’s GoFundMe raising money for funeral expenses. “As with many of you, I’m greatly saddened and shocked by the news of this tragic event and my prayers are with all of their families.”

“Out of respect for the families, I have taken down my photo with the couple and the post announcing their marriage, primarily due to the insensitive nature of some comments that were being made on that post,” the judge added.

The GoFundMe page, started by an uncle who considered himself Diaz’s guardian, describes the crime as “a parent’s worst nightmare.”

“She was the light to our family and community. Always with a smile, and cheerful personality. The absence of her from our lives will be felt forever,” the page says.

Guidry said there had been prior disturbance calls related to the property, but none had risen to anywhere close to the level of violence Wednesday.

How Republicans are redefining the House now that they have a…