The victory by McAuliffe creates a battle between Virginia and outsider Youngkin. 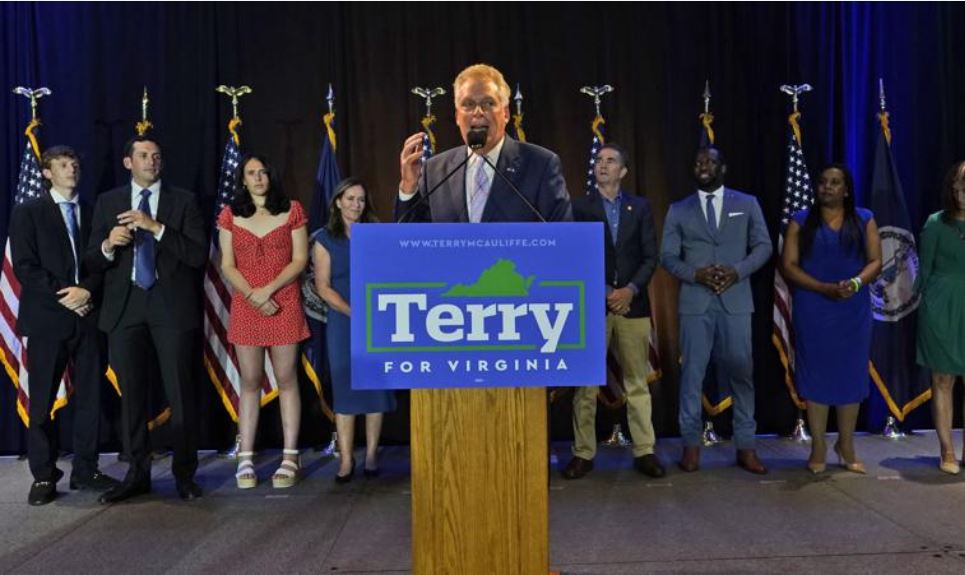 Terry McAuliffe, a longtime fixture in Democratic politics, easily secured his party’s nomination for governor of Virginia in his bid for a second term, setting up a closely contested general election against GOP opponent Glenn Youngkin, a wealthy businessman and political neophyte.

McAuliffe made the case in his victory address Tuesday night that Youngkin is too conservative for a state that has long been turning blue.

“Let me be clear: Glenn Youngkin is not a moderate Republican,” said McAuliffe, who won the primary over four challengers.

Youngkin retorted, describing Virginia as a state that has become less safe, more expensive, and lacking in economic possibilities over the last two Democratic governorships.

In a statement, Youngkin said, “We need a different sort of leader to bring a new day to Virginia.” “Be prepared for Terry McAuliffe to fall back on the same political games he’s played his whole life.”

McAuliffe served as governor from 2014 to 2018, and was a veteran Democratic Party donor and personal friend of Bill and Hillary Clinton. He was barred from seeking re-election to a second term, as were all Virginia governors. He entered the race in December after deciding not to run for president in 2019.

This year, Virginia is the only state in the country with an open governor’s race, and the race is likely to garner a lot of national attention as a barometer of voter mood in both parties heading into the midterm elections.

The election has also taken on greater significance as a referendum on the enormous changes that Democrats have enacted since taking full control of the state government in 2020. They’ve fought for gun control and police reform, as well as marijuana legalization and a higher minimum wage, transforming a state that was once firmly red.

In his remarks, McAuliffe stated, “We are a different state than we were eight years ago, and we are not going back.”

McAuliffe, 64, ran on a platform of strong action to fix Virginia’s lagging teacher pay and educational budget imbalances. He’s also promised to push for a $15 minimum wage in Virginia by 2024, defend abortion rights.

Gov. Ralph Northam endorsed him, saying McAuliffe was the finest candidate to lead Virginia out of the economic recovery following the pandemic and to solidify the transformational changes that Democrats have implemented.

“I loved what he did and am certain that he can deliver on his promises. Joe Glaze, a 70-year-old retired clergy member who voted for McAuliffe Tuesday afternoon in Richmond, believes he can win. “The most important thing is that I want someone who can win and beat Youngkin.”

Some more progressive voters chastised McAuliffe for his record on energy and criminal justice issues, and regarded him as standing in the way of Carroll Foy and McClellan, who were both seeking to become the nation’s first Black female governors.

“Let’s get down to business. Let’s put in the effort because, at the end of the day, we have to win in November,” Carroll Foy stated.

Del. Hala Ayala won the Democratic primary for lieutenant governor on Tuesday, all but ensuring Virginia’s first female lieutenant governor will be elected soon – her Republican opponent is Winsome Sears, the first Black woman to gain a major party’s endorsement for statewide office.

In May, Republicans held a multisite convention to choose their nominees for this year’s statewide races. Youngkin, a former investment fund executive with no voting record to investigate, has committed to support his campaign with his own money.

Andrews stated, “I’m pleased to see a strong Republican running because we need two parties.” “Neither party will be honest if we don’t have two parties.